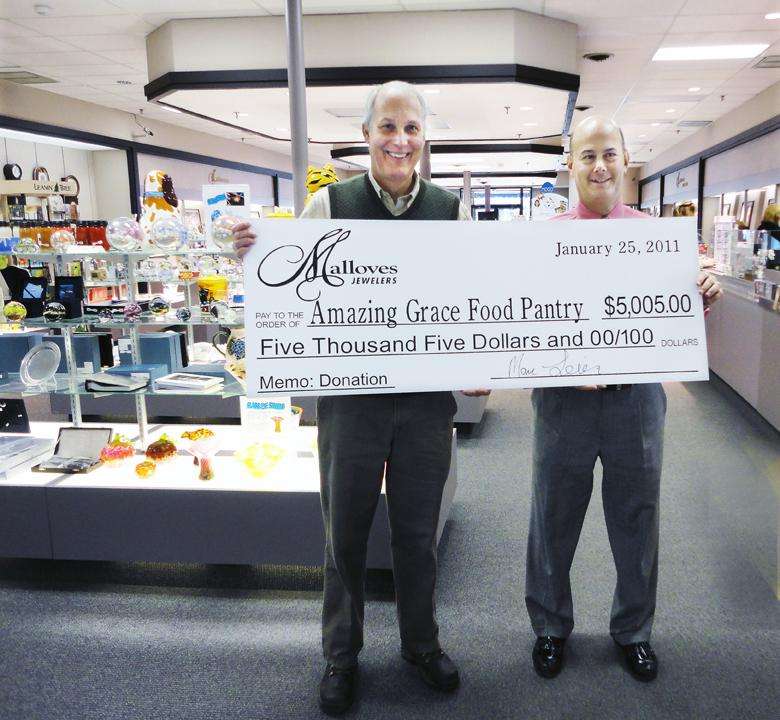 Written for The Middletown Press by Jason Siedzik: Thursday, February 17, 2011

MIDDLETOWN – One factor in Malloves Jewelers’ sense of community involvement is giving back to those in need. The company gave some of their inventory to help feed Middletown families as a silent auction of several pieces of jewelry raised just over $5,000 for Amazing Grace Food Pantry.

Most of Amazing Grace’s funds come from private donations, be they from individuals, businesses or religious groups. Only $30,000 of the pantry’s $180,000 annual budget is covered by city or federal funds. Although the bulk of the pantry’s food comes from the food bank system, Krom said they also accept donations from businesses, churches or synagogues, and “all types of people.”

The monetary donation comes in handy in light of Amazing Grace’s recent move to a larger facility at 16 Stack Street. While the new building stores about the same amount of food as their old headquarters, stock is much more organized in the new building than in the past.

Amazing Grace, according to Krom, operates on local donations and only serves Middletown residents. Although they do receive donations from outside of the city, the food pantry will direct anyone in need of their services to a more appropriate location.

Amazing Grace’s usage has increased in recent years, thanks to the decision to open on Saturdays. Krom estimates that demand has increased approximately 25 percent since opening Saturdays – the pantry is open Monday, Wednesday and Friday afternoons – but said that their services are limited by supply.

Malloves’s donation only continues what has been a positive relationship between the Main Street fixture and the food pantry. Levin said that the store held a silent auction two years ago as a fundraiser, repeating it to benefit what they saw as a good cause; as Malloves’s president said, “that’s a lot of food they give to people.”

“Ron needs this the most, economically,” Levin said. “If it’s $5 or $50, he appreciates whatever people can give.”

Questions about this product?